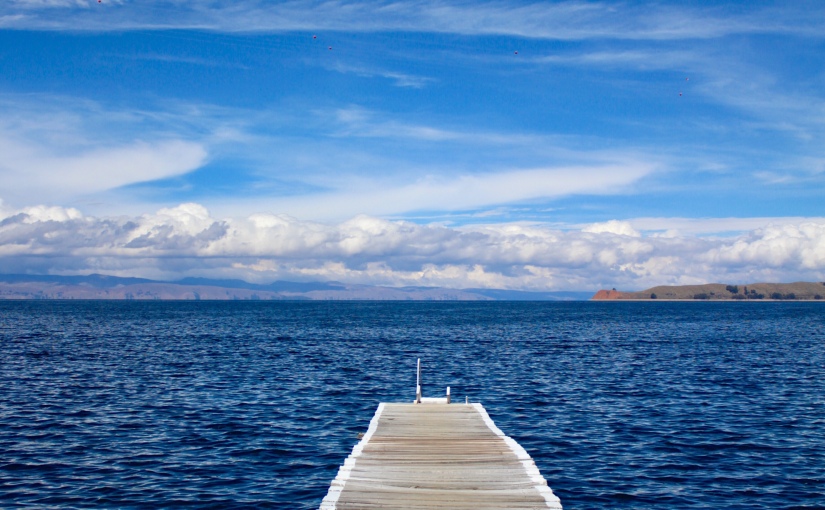 After four fantastic weeks it was time to leave Peru and head further South to Puno and cross the border into Bolivia.

Bolivia was always the country that I would use to get to Argentina, but it in fact it surprisingly turned out to be one of the most beautiful I would visit on this trip.

Arriving into Copacabana after a quick change of buses at Puno and crossing the border. Mid morning and we needed some bolivianos and a local SIM card before the boat left for Isla de Sol at 1pm. The currency here, was easy to translate back to pounds. Just had to remove some zeros.

Isla de Sol is positioned in the middle of Lake Titicaca and only has two boats a day, one at 8am and the second at 1pm. Boy oh boy do they pack us in. Determined on only sending one boat, more of us than the boat should really take were ushered on board.. 20B/£2 one way.

Arriving safe and sound, all be it tired from the long journey we walk up the jetty to find that our hostel was at the top of the steep hill. We were told it would take forty minutes to walk. We got very weird looks, a smirk, even a laugh when we asked for a donkey to take our bags. 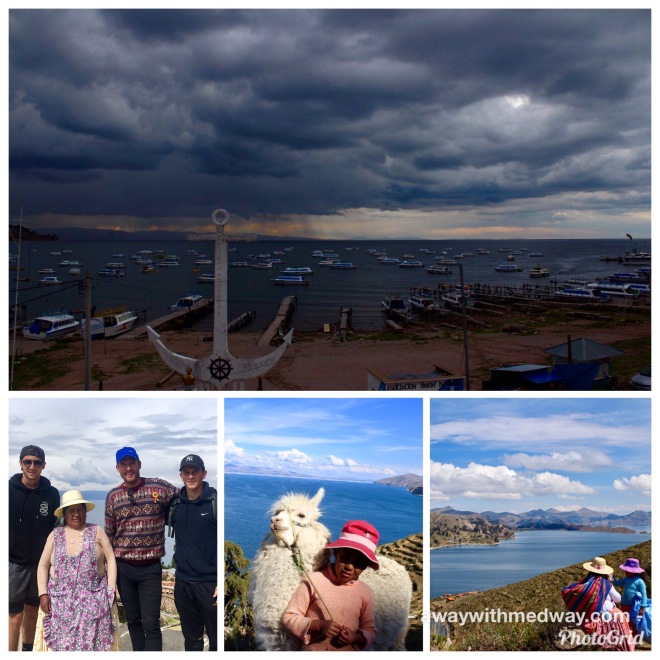 With the sun beating down and nothing but my weary tired body to carry all my 17kg, it was up the steep steps and the long winding walk to our hostel. Did I mention that this is the highest navigable mass of water in the world at 3812m. Well my lungs and legs knew it was.

It was all worth it to be greeted by the lovely owner of Hostal Wara Uta.

It is said that Isla de Sol was the birth place of the Inca’s and is now a beautifully preserved slice of old Bolivia. Once the most important religious place for the Andeans in the Sixteenth Century, it was believed that the sun and moon were created here many hundreds of years ago. The island has some important Inca ruins and you can visit Isla de Luna, known by the Incas as the Queen Island.

Although visiting the ruins may prove difficult due to an on going ten month fued between two tribes. The Ch’allampa in the North and the Ch’alla in the middle. A dispute over land and the rights to the Inca ruins, means that only the Southern part of the island, where the Yumani tribe live is accessible currently.

The North part of the island where the larger ruins are located are out of bounds, thanks to a group of men waiting at a check point, complete with red flag at full mast and a road block.

Not to worry there are still a few things to see in the South, like the little Inca house, and the walk to the highest point that gives you a breath taking panoramic view of the Lake and beyond. 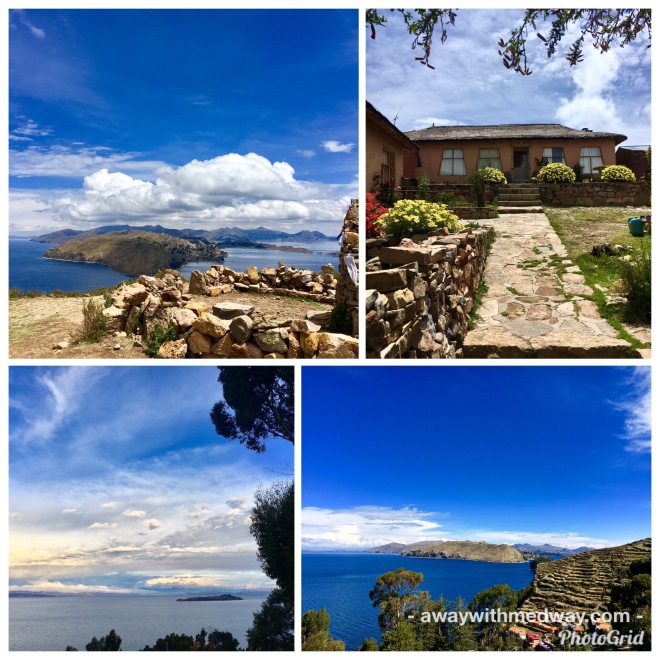 Also not forgetting the little gem that is Las Velas, a cute little restaurant snuggled amongst the eucalyptus trees at the top of the village, a great place to take a load off with a glass of wine and watch the sunset. Las Velas is a one man band owned by Pablo, a gourmet chef who use to work in posh restaurant in Lima.

Las Velas translates into ‘the candles’ runs without electricity, meaning each wooden table is lit by candle light and is draped with colourful table cloths. There is such a homely feel about the place. The kitchen is to the rear where Pablo cooks and prepares delicious dishes like steamed fresh trout in white wine or homemade lasagne, with his head torch as the only form of light.

Because everything is made fresh to order, be prepared to wait a while. We get comfortable in the cosy restaurant with some playing cards and bottle of good Bolivian red wine. The food is well worth the wait and its the perfect setting to spend an evening out of the cold.

The boat back to the mainland only leaves twice daily, at 10am and 4pm. We take the 4pm boat and manage to catch the bus to La Paz at 6pm. Advertised to take three hours and only costing 30B/£3.10. However what we are not told is the time it takes to cross the lake. Add on at least another hour for this.

Bungled into a little boat to cross the water, while the bus makes it over on a what looks like a floating piece of wood with gates. The bus slowly float across to meet us one the other side.

Arriving into La Paz at 10pm, we were lucky that our hostel was a five minute walk from the bus station. The Adventure Brew Hostel in La Paz is advertised as a party hostel where you get a free beer everyday after 7pm.

What could be better than that. It certainly made the Germans very happy.

While in La Paz there are two things I really want to do. Ride the Death Road and watch a Cholita Wrestling match. The Germans aren’t so keen on the Death Road, and need some coercion to book. They would never admit it, but they are chicken. We book for a few days time so they can get come courage.

Cholita Wrestling “what is that I hear you say..” Well it is one of the most ridiculous but funny sights I have witnessed and a must see for anyone visiting La Paz.

A Cholita is a woman native to Bolivia that predominantly lives in the countryside. She wears the custom dress, of brightly coloured knee length skirt, with several under skirts for volume. Tights, a blouse and a bright coloured shawl finished off with a hat . Depending on what part of Bolivia will depend on the size and shape of the hat.

And the position of the hat tells the men whether the Cholita is single or married. We are told on our walking tour, that the best asset a Cholita can have is big calfs. The men look for this when courting, as it indicates she can carry many items and children up the Bolivian hills. A pebble thrown at the feet of a Cholita shows that a man wants to court her.

No apps used here, just a simple sign with a pebble.

Now you have picture of a Cholita, the wrestling part is easy. Its two women in the ring pretending to wrestle. One always being younger than the other. Some of them really do take a battering and go down with some force. The knee protection an indication on how painful it can be. 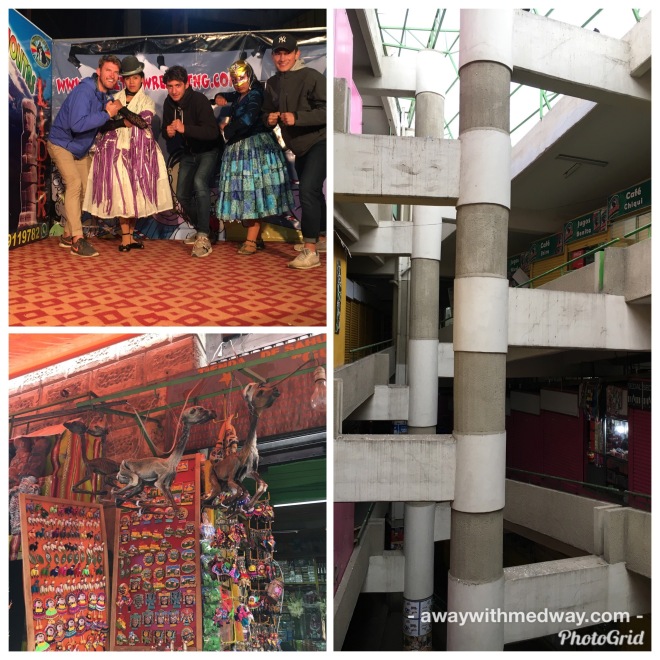 It is basically Bolivias version of WWF. The one from the 90’s where men dressed in lycra, had big hair and fake tan and rolled around a boxing rink. 90B/£9 is well worth witnessing this spectacle, the ticket includes a drink, popcorn and a gift. My gift proudly hangs on my rucksack.

La Paz itself is not what you would call a beautiful city, set in the valley high in the mountains. In fact the highest capital city in the world. It can easily be covered in one or two days. By taking the free city walking tour and taking a trip on the Teleferico that travels above the city as a key transport link. At night it is pretty spectacular to see all the lights twinkling for miles around.

The day had finally come, for us to follow on so many a travellers path and cycle down the ‘Death Road’. Only an hour from La Paz, there are plenty of companies that offer a full day. Prices can vary from the most expensive 900B/£92 to the cheapest 350B/£35. The more you pay the better the bikes. We opted for somewhere in the middle and paid 470B/£48 at Barro Bikes.

It was an 8am pick up from the hostel to get to the start of the road and meet our bikes and put on our incredibly fetching outfit, complete with knee and elbow guards. I have to admit the bikes had seen better days and I was jealous of the brand spanking new ones the group next door had.

Fully fitted out and with our working bikes we followed the guide out on to the road. The first thirty minutes are all down hill on a winding highway through the valley. It was head down for full aerodynamics and full speed ahead.

Some poor girl had hit a massive pot hole in the road and must have gone over her handle bars, as she was being attended to by the side of the road. This is definitely not for the faint hearted.

We make it to the start of the Yungus Road aka the ‘Death Road,’ and the road turns from tarmac to gravel, with bumps and holes all over the place. Looking out across the valley I can see the sandy coloured road bend around the edge of the mountain, far into the distance.

The guide takes off again and I’m the first to follow, zipping down the hill I follow his tracks as he knows the best route. Navigating the tight corners, with just a few bushes between me and the cliff edge and the hundreds of metres down to my death. 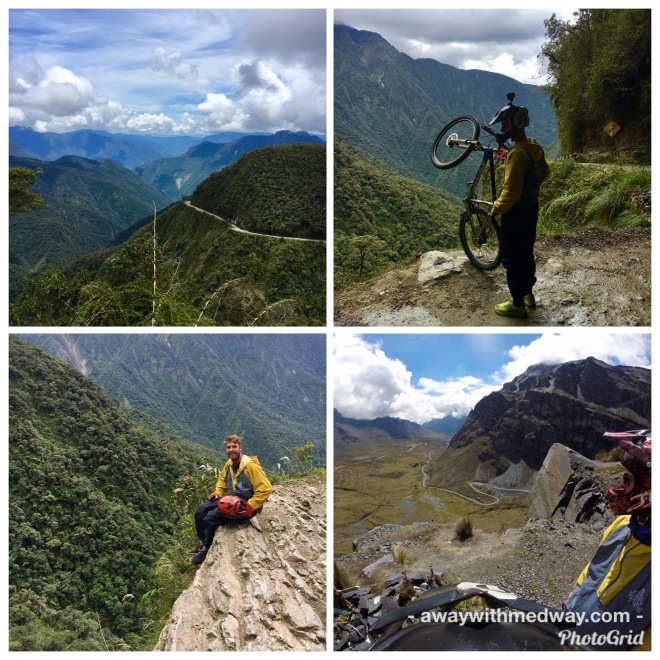 With more than 20 cyclists, a bus and few lorries, this road has taken many lives. Thankfully the last was back in 2011, and in the last 6 years safety has improved. But one wrong turn or boulder at the wrong corner I could quite easily be a gonna.

The guide stops so we can wait for the rest of the group. Who I realise are miles behind. Poor Esteban has his second puncture of the morning and meets Keno and me and ask ‘how do you go round the corners so quick”.

I actually surprise myself at how little concern I have and just go as quick as I can for the remaining 2 hours of cycling.

The adrenaline and thrill of it all is incredible. I have never been this fearless before. As we descend further and further I de-layer more and more clothes as the heat gets too much under the days sun. We were lucky with the weather, only a few days before the route was covered in snow.

The guide stops at the most prolific corner for taking lives. I sit down and dangle my legs over the edge of the cliff edge, knowing that a bus and few lorries have gone over; pretty scary.

At the end some much needed beers are in order. A short drive and we arrive at the lunch destination with a swimming pool. Best chips in South America so far. Undercooked chips are very common in South America – so two helpings are required here.

After an hour of playing about in the pool with some of the group, it was time to load back into the mini bus and make the two hour journey back to La Paz. Fingers crossed we would make our 8pm bus to Sucre.